You are here: Home / Library / Two Heads Are Better Than One 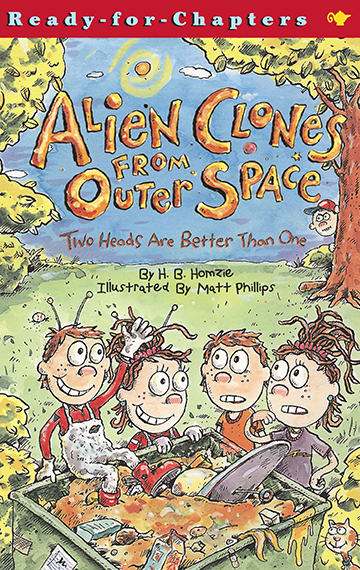 Double Trouble! Barton and Nancy Jamison are just regular kids. That is until alien clones land in their hometown of Pine Bluff. Now there are two Barts and two Nancys! So what do the kids decided them to do? Use them to do chores. But (and this is a really big but), the alien clones, Beta and Gamma, have a totally wacky take on earth life. Whenever they’re around, something always gets messed up.

Beta thinks the living room is alive and feeds the furniture and mows the carpet. And when the alien plays baseball for Barton, watch out. When Coach tells Beta to tear up the base, he… well…you guessed it. He shreds second base. And when he tells the clone to run home, the clone’s a little confused. After all, Beta’s home is on Ungapotch a million trillion light years away.

“Extremely funny book about twins that find out they have clones from outer-space. These clones have special powers that enable them to do well on tests and his baseballs out of the park…but they are also unfamiliar with cultural norms” –Kate Hastings, k8talksbooks.blogspot.com

“Who wouldn’t want a close to do chores they didn’t like or things they weren’t great at?” –Carolyn Leiloglou, author of Noah Green: Junior Zookeeper